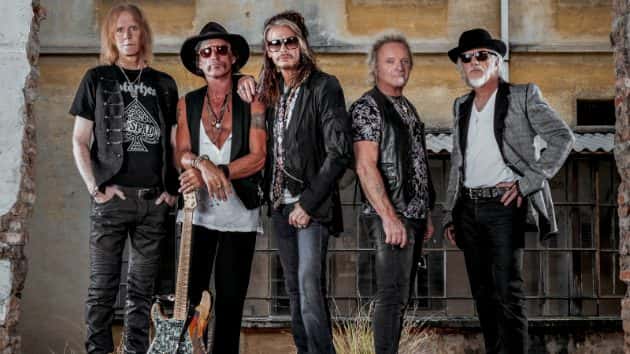 Credit: Zack WhitfordOn Sunday, Aerosmith singer Steven Tyler hosted his second annual Grammy Viewing Party benefit for his Janie’s Fund charity, and he got his famous band together to headline the bash.

Billboard reports that the event, held at Raleigh Studios in Los Angeles, raised a total of $2.8 million for Janie’s Fund, which helps young female victims of physical and sexual abuse.

This year’s fundraiser was a significantly larger event than the inaugural Grammy Viewing Party. “That’s what we wanted,” Tyler told Billboard during the benefit. “It means people are starting to feel it in their heart and they understand our mission!”

Aerosmith played a hit-packed, 11-song set that included classics such as “Back in the Saddle,” “Love in an Elevator,” “Cryin’,” “Sweet Emotion,” “Dream On,” “Walk This Way” and “Janie’s Got a Gun,” which was the inspiration for Janie’s Fund.

During the show, Stone jumped onstage wirth the band and played some harmonica. Video clips of Aerosmith performing “Let the Music Do the Talking” are posted on the group’s social media sites.

In addition to the group’s performance, the event featured a dinner, cocktails, an auction, speakers and, of course, a viewing of the awards ceremony.

Among the items sold during the auction: a guitar owned by Joe Perry, which fetched $80,000 and a Can-AM 3-wheeler belonging to Tyler, which brought in $40,000.

The gala was hosted by Glee star Jane Lynch, who said of Janie’s Fund, “It’s an amazing organization. Steven is so passionate about it and to hear him talk about it, you want to write a check and get involved.”