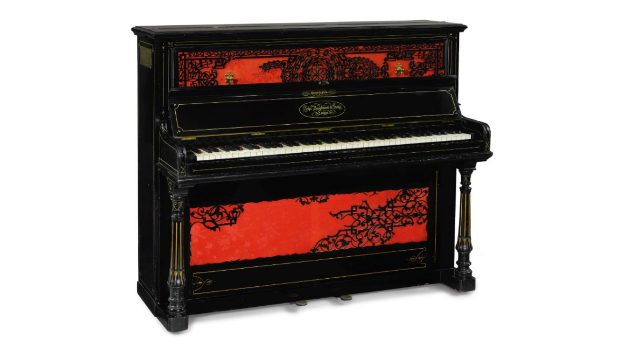 Courtesy of Gotta Have Rock and Roll

Courtesy of Gotta Have Rock and Roll

Money can’t buy you love, but it can score you some cool Beatles memorabilia.

An antique piano once owned by John Lennon and used by the famed Beatle to write several songs featured on the Sgt. Pepper’s Lonely Hearts Club Band album, was purchased at an auction Saturday for $718,000 by Jim Irsay, owner of the National Football League’s Indianapolis Colts, the Indianapolis Star reports.

“I’m elated to now be the steward of John’s ‘Sgt. Pepper’ upright piano,” Irsay, a noted Beatles fanatic and rock-memorabilia collector, wrote Saturday in a post on his Twitter. “It’s a responsibility I take seriously, with future generations in mind.”

According to the Gotta Have Rock and Roll auction site, the piano was made by the John Broadwood and Sons company and dates back to about 1872. Lennon purchased the instrument, which is an ornately painted upright model, in or around 1966 and used it as his Kenwood and Tittenhurst Park residences in the U.K.

Lennon eventually gave the instrument to a friend, but first had a plaque affixed to it that reads, “On this piano was written: A Day in the Life, Lucy in the Sky with Diamonds, Good Morning, Being for the Benefit of Mr. Kite and many others. John Lennon. 1971.”

The piano was estimated to fetch between $800,000 and $1.2 million. Following the auction, the owner of Gotta Have Rock and Roll posted a Facebook message congratulating Irsay “for winning this incredible piece!”

Previous rock collectibles Irsay has purchased include a 1963 drum kit that Ringo Starr used to record some of The Beatles’ biggest early hits, Jerry Garcia‘s famous “Tiger” guitar, and the Fender Stratocaster that Bob Dylan played at the 1965 Newport Folk Festival.