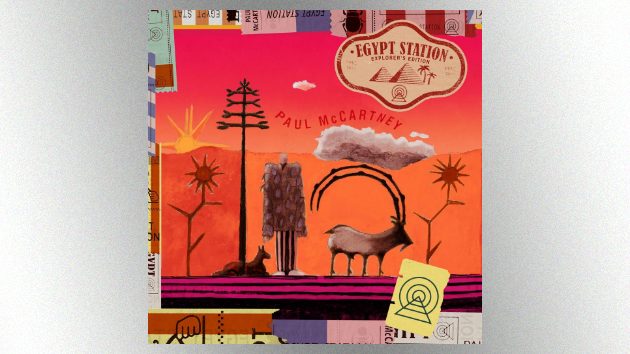 Capitol Records/UMePaul McCartney will treat fans to an expanded version of his chart-topping 2018 studio album, Egypt Station.  Dubbed the “Explorer’s Edition,” it’ll arrive in stores on May 17.

The deluxe release will feature the original Egypt Station album and a bonus disc offering extra studio recordings, including an extended version of “Who Cares” and the surprise single “Get Enough,” as well as live performances from the special shows McCartney played last year in London, New York City and his hometown of Liverpool, U.K.

Egypt Station: Explorer’s Edition will be available as a two-CD set, a three-LP vinyl package and digitally.

All of the bonus tracks also are available in McCartney’s previously announced limited-edition Egypt Station: Traveller’s Edition luxury box set, which is completely sold out.

Egypt Station: Explorer’s Edition, which can be pre-ordered now, will arrive in advance of the 2019 North American leg of Sir Paul’s Freshen Up world tour, which kicks off May 23 in New Orleans.

CD 1: Egypt Station
“Opening Station”
“I Don’t Know”
“Come On To Me”
“Happy with You”
“Who Cares”
“Fuh You”
“Confidante”
“People Want Peace”
“Hand in Hand”
“Dominoes”
“Back in Brazil”
“Do It Now”
“Caesar Rock”
“Despite Repeated Warnings”
“Station II”
“Hunt You Down/Naked/Clink”

CD 2: Egypt Station II
“Get Started”
“Nothing for Free”
“Frank Sinatra’s Party”
“Sixty Second Street”
“Who Cares” (Full Length)
“Get Enough”
“Come On to Me” (Live at Abbey Road Studios)
“Fuh You” (Live at The Cavern)
“Confidante” (Live at LIPA)
“Who Cares” (Live at Grand Central Station)

And here are all of McCartney’s 2019 North American tour dates: