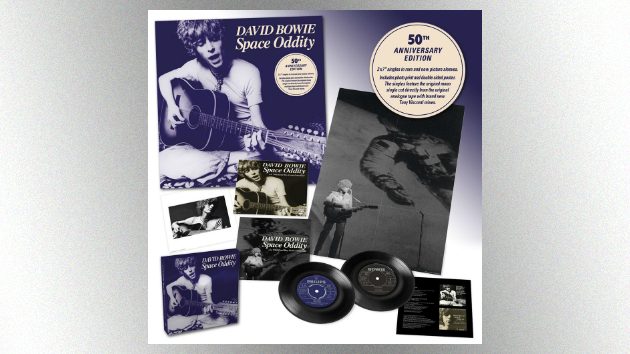 ParlophoneYet another David Bowie vinyl box set in honor of the 50th anniversary of the late rock legend’s classic song “Space Oddity” is on the way.

The Space Oddity: 50th Anniversary Edition collection will be released on July 12. It includes two seven-inch singles, one with the original mono single edit of the tune, and the other featuring a newly mixed single edit created by longtime Bowie producer Tony Visconti.

The discs also will feature, respectively, the original mono mix and a new Visconti mix of the “Space Oddity” single’s B-side: “Wild Eyed Boy from Freecloud.”

In addition, the box set includes a two-sided poster boasting an original “Space Oddity” print ad on one side and a photo of Bowie at the “Save Rave ’69” concert held at the London Palladium on the other.

Finally, the collection comes packaged with an information card and a print featuring a Bowie pic taken during the shoot for the “Space Oddity” promo single’s cover photo.  Both discs are housed in sleeves featuring vintage photos of David.

The new Visconti mix of “Space Oddity” also will be released as a digital single.

“Space Oddity” was originally released as a seven-inch single in July 1969, and was also the opening track of Bowie’s self-titled second U.K. studio album.