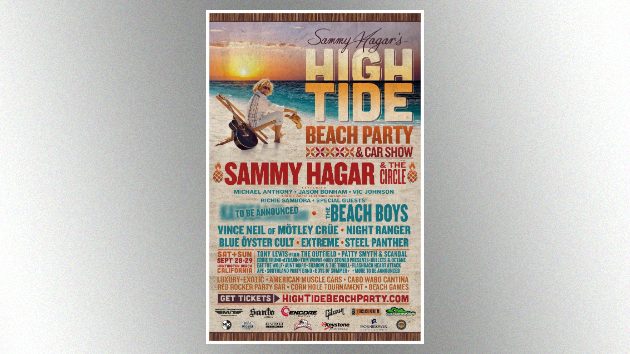 Courtesy of High Tide Beach PartyLast October, Sammy Hagar host his inaugural High Tide Beach Party & Car Show in Huntington Beach, California, and now the Red Rocker has announced plans for a second annual installment of the bash, which this year has been expanded to two days.

The seaside extravaganza is scheduled for September 28 and 29 and, like last year, Hagar and his current band The Circle will serve as headliners.

The bash also will feature an expansive display of unique automobiles, including include Hagar’s Ferrari BB512i — which appeared in his “I Can’t Drive 55” music video — and the legendary “General Lee” 1969 Dodge Charger featured in The Dukes of Hazzard TV series.

The party includes beach activities and games, a cornhole tournament, special photo opportunities, and a temporary beachside version of Sammy’s Cabo Wabo Cantina which will serve a specially curated food and drink menu.

Sunset and brunch cruises also will be offered during the weekend. Tickets and VIP packages for the 2019 High Tide Beach Party & Car Show will go on sale this Thursday, May 16, at 7 a.m. PT. Visit HighTideBeachParty.com for more details.