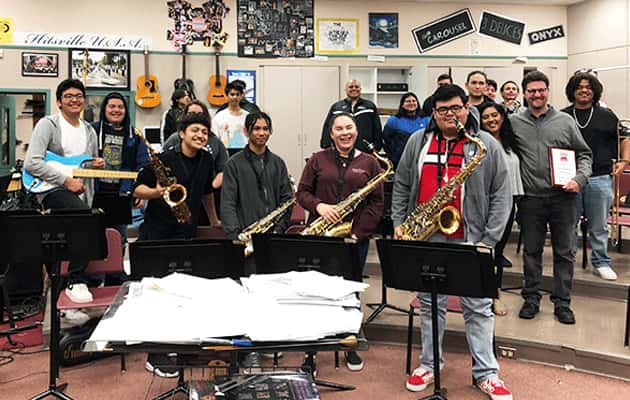 Kyle Thompson, a teacher at Elsie Allen High School in Santa Rosa City Schools District, has been named Sonoma County Teacher of the Month for March 2019.

The monthly award honors one of Sonoma County’s most outstanding teachers from October through May. It is sponsored by the Sonoma County Office of Education (SCOE), K-HITS 104.9, and Community First Credit Union (CFCU), with additional support from Platinum Chevrolet and Bernstein Orthodontics.

“We need high-quality, caring teachers now more than ever to help our students thrive in a complex and ever-changing world,” said Steven D. Herrington, Sonoma County Superintendent of Schools. “The Teacher of the Month program this year seeks to honor, support, and thank those teachers.”

A heartfelt nomination from Mr. Thompson’s former student and current Santa Rosa City Schools Board Member Stephanie Manieri described Mr. Thompson as “An amazing and dedicated educator that has impacted the lives of many students throughout his career, including my own.”

Mr. Thompson acts as director of the Elsie Allen High School Music Department and Chair of the Visual and Performing Arts Program. But his service to students goes far beyond that, Ms. Manieri wrote.

“From picking up students on his way to his zero period choir class to providing a microwave and minifridge for his classroom, Mr. Thompson has always been one to take care of his students as if they were his own children,” she said.

Ms. Manieri wrote that Mr. Thompson encouraged students every day to overcome their circumstances and be their very best. He accepted invitations for the school jazz band, choir, drumline, and marching band to perform all across the city and even at conferences in San Francisco and Fresno. “His goal was to show us that there are adults that care about us and want to see us succeed in life. These experiences opened our minds to a larger world beyond the barriers of Southwest Santa Rosa,” she said.

Ms. Manieri joined a delegation of representatives from SCOE, K-HITS, and Elsie Allen High School that surprised Mr. Thompson with the recognition during his band class on Wednesday, April 10.

Mr. Thompson credited his students and fellow staff at Elsie Allen for making his work possible. “I just feel like I’m part of a big family here and that’s part of the reason why I’m successful, there’s no doubt about that in my mind,” he said.

Learn more and nominate a special teacher in your life by going to sonomacountyteacher.com.