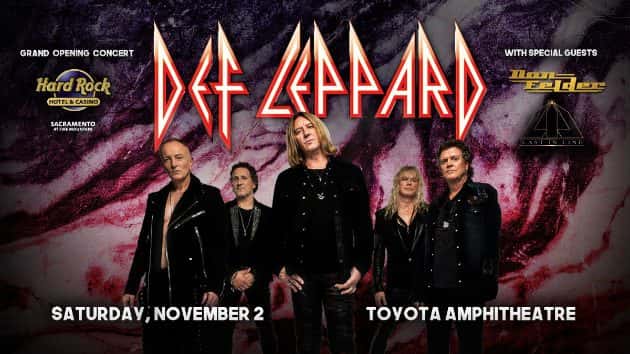 Courtesy of Hard RockDef Leppard will help pour some sugar on the opening festivities for the new Hard Rock Hotel & Casino Sacramento at Fire Mountain. They’ll play a special grand-opening concert on November 2 at the nearby Toyota Amphitheatre in Wheatland, California.

The show will  also feature ex-Eagles guitarist Don Felder and Last in Line, a band made up of former Dio members, including Def Leppard’s Vivian Campbell.

Opening celebrations for the hotel and casino will begin on Wednesday, October 30, kicking off with the traditional Hard Rock guitar smash.

Tickets for the Def Leppard concert go on sale to the general public this Friday, September 13, at 10 a.m. PT at LiveNation.com.

This past week, Def Leppard wrapped up a Las Vegas residency at Zappos Theatre, and band has only one other full concert on its 2019 schedule: an October 12 headlining appearance at the Exit 111 Festival in Manchester, Tennessee. That festival’s lineup also includes ZZ Top, Cheap Trick, Ghost and Mastodon.