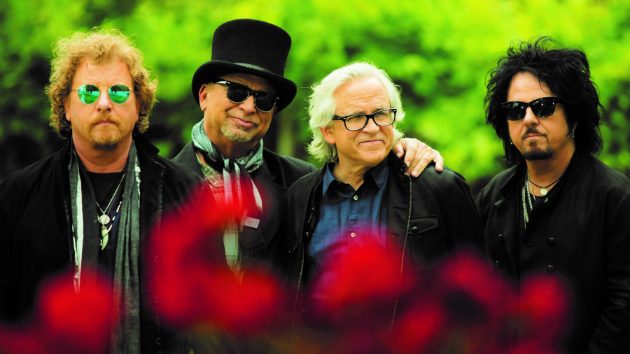 Credit: Heather PorcaroToto launches a new U.S. tour leg tonight in Los Angeles, and guitarist Steve Lukather reveals that the outing will not only bring the band’s long-running 40 Trips Around the Sun trek to a close, but it may be the group’s last stateside tour ever.

“[A]s of [October] 20th that’s all that we have on the books for the foreseeable future,” he tells ABC Radio. “I got a whole year planned doing other stuff. Everybody else has got other stuff to do…But in the meantime…it’s been a great, great run, and we’re really excited about coming out [to play].”

The guitar whiz says he can’t get into details about why Toto is going on indefinite hiatus, but notes, “It’s not like we’re fighting amongst ourselves. It’s just there’s a whole bunch of, outside of us, business issues that are really messed up.”

Lukather reports that the new shows will feature a set similar to the one featured on Toto’s new live album and concert video, 40 Tours Around the Sun, which was recorded this past March in Amsterdam.

“[W]e wanted to play stuff from all the records that we’ve done, all the incarnations, and I think we stayed pretty good to that,” he tells ABC Radio.

Regarding how the set list came together, Lukather explains that the core members each picked a song “they really wanted to do, and then we picked stuff that the fans wanted from our Facebook page…And then we [included] all the big hits and all the stuff people really want to hear.”

Steve also reveals that, unfortunately, founding keyboardist/singer David Paich has been ill and won’t be touring with Toto, although he “may show up at a gig or two.”