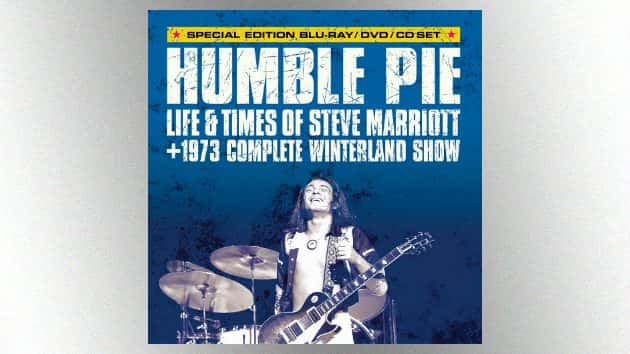 Cleopatra EntertainmentPeter Frampton and Cheap Trick‘s Rick Nielsen and Bun E. Carlos are among the music stars featured in a documentary about late Small Faces and Humble Pie frontman Steve Marriott that will be released as a special Blu-ray/DVD/CD set on November 19.

Humble Pie: Life and Times of Steve Marriott takes an in-depth look at the dynamic yet unsung singer/guitarist, who died in a tragic house fire in 1991 at age 44. The film features archival interviews with Marriott, unseen photos and memorabilia, home movies and rare performance footage of Small Faces and Humble Pie.

Marriott co-founded Small Faces in 1965 and wrote or co-wrote many of the band’s songs, including its biggest U.S. hit, “Itchycoo Park.” He left the group in 1968, and then formed the popular boogie-rock outfit Humble Pie with Frampton, Shirley and Ridley.

The DVD and Blu-ray boast a variety of bonus features, including behind-the-scenes footage, an interview with Frampton, a secondary audio track with just the music from the film, an interactive photo gallery and more.