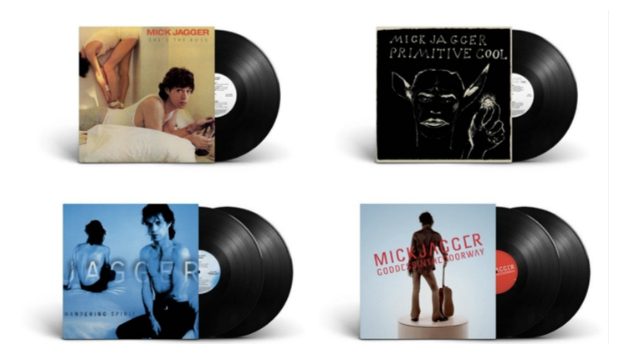 While Jagger had occasionally been involved in music projects outside of The Stones, including the 1984 hit collaboration with The Jacksons, “State of Shock,” She’s the Boss marked his first full-fledged solo album. The record peaked at #13 on the Billboard 200 and featured the hits “Just Another Night” and “Lucky in Love,” which reached #12 and #38, respectively, on the Hot 100. The album included guest contributions from Pete Townshend, Jeff Beck and Herbie Hancock, and has sold a million copies in the U.S.

Primitive Cool only reached #41 on the Billboard 200 and yielded the #39 hit “Let’s Work.” It included appearances by Beck, Living Colour‘s Vernon Reid and Eurythmics‘ Dave Stewart, the latter of whom co-produced the album.

Wandering Spirit was co-produced by Jagger and Rick Rubin, and peaked at #11 on the Billboard 200. It featured such guest musicians as Lenny Kravitz, Red Hot Chili Peppers bassist Flea, Tom Petty keyboardist Benmont Tench, and Billy Preston. Kravitz lends vocals to a cover of the Bill Withers hit “Use Me.” The album sold over 500,000 copies in the U.S.

Goddess in the Doorway reached #39 on the Billboard 200, and featured no charting singles.  Stars who contributed to the record include Kravitz, Bono, Townshend, Joe Perry, Wyclef Jean and Rob Thomas.

Here are the albums’ track lists:

Side C
“Mother of a Man”
“Think”
“Wandering Spirit”

Side C
“Goddess in the Doorway”
“Lucky Day”
“Everybody Getting High”