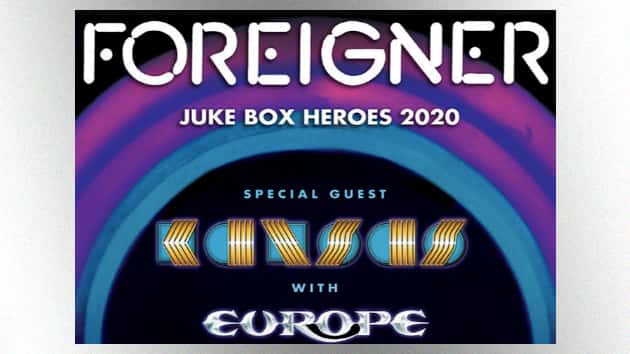 Courtesy of Live NationForeigner has announced plans for a 2020 edition of their Juke Box Heroes Tour, which also will feature Kansas and Europe. The 40-date North American summer trek kicks off July 9 in Albuquerque, New Mexico, and is mapped out through a September 13 concert in Austin, Texas.

Tickets go on sale to the general public this Friday, January 17, at 10 a.m. local time at LiveNation.com.

All of the shows will take place in the U.S. with the exception of an August 8 performance in Toronto. A few of the dates only will feature Foreigner and Europe. Visit ForeignerOnline.com for details.

“We can’t wait to hit the road with our good friends Kansas and Europe and bring all our biggest hits to cities across the country,” says Foreigner’s Mick Jones. “We always have such a good time together, and combined we share some of the greatest songs in rock and roll.”

Adds Kansas in a joint statement, “We look forward to touring with Foreigner. It has been nearly ten years since both bands have done a full tour together. That run was a blast, and we are excited to get started this summer.”

Besides the Juke Box Heroes Tour, Foreigner’s 2020 itinerary includes a January 16-18 engagement in Nashville that will feature the band performing with the Nashville Symphony; Las Vegas residency shows in late January, early February and April; various North American concerts in February, March and April; a U.K. trek with Whitesnake and Europe that runs from a May 31 to June 8; and a series of European festivals and headlining performances later in June.

As for Kansas, the prog-rock veterans are planning to release a new studio album this summer. The band also has dozens of U.S. headlining shows on their 2020 schedule.