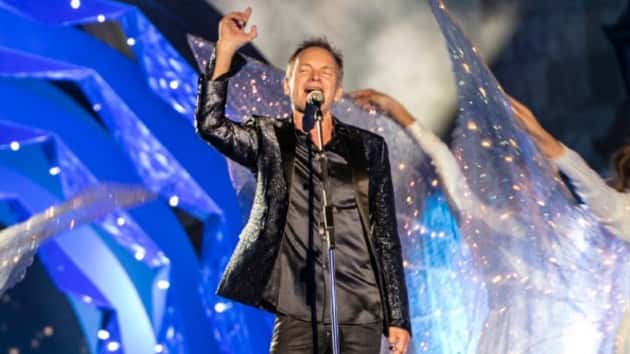 Sting is currently performing in the re-launch of his musical The Last Ship in Los Angeles, but later this year he’ll head to Las Vegas for a brand-new residency. On Thursday night’s Jimmy Kimmel Live! episode, the singer teased fans on what they can expect from the Sin City show.

“Actually having your own room, your own space, is something I’m really looking forward to because I can create my world there, invite people into my world,” Sting said of performing the show at Caesars Palace.

“Normally my show is just music and it’s really good lights, it’s a good show, but there’s no theatrical element,” he explained. “So I’m gonna explore that thing. Have a dancer or two, some fantastic scenery. Not perhaps changing a robe every song, no headdresses…that’s not me.”

He also rejected Jimmy Kimmel‘s suggestions of having a tiger and magicians on stage. “I do the magic,” he joked.

The residency, called My Songs after his latest album, will feature, “a compendium of Sting’s songs with dynamic, visual references to some of his most iconic videos and inspirations.” It kicks off May 22.