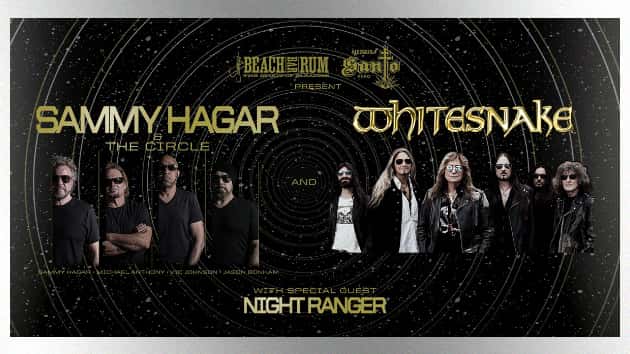 Courtesy of Live NationTalk about a tour that hard-rock dreams are made of! Sammy Hagar and his current band The Circle will team up with Whitesnake and special guests Night Ranger for a 30-city trek that will travel across the U.S. for the better part of the summer.

The outing kicks off July 9 in West Palm Beach, Florida, and is scheduled through a September 20 concert in Chula Vista, California.

Tickets for the shows go on sale to the general public this Friday, January 31, at 10 a.m. local time at LiveNation.com. Visit RedRocker.com for a full list of dates.

“I love some friendly competition on stage and that’s exactly what this is going to be,” says Hagar. “David and I have nothing but the highest respect for one another, but we would also like to blow the other guy off the stage! Add in Night Ranger and the fans will have one hell of a night of music.”

Adds Coverdale, “The Red Rocker & The Snake??? OMG…I wanna see that show myself!!! I’m a big fan of Sammy Hagar, Michael, Vic & Jason…We’re gonna have a blast together!! See Y’All There, People!!!”

To promote the tour, Hagar and Coverdale have shot a video in which they discuss their respective love of tequila and tea, share their mutual admiration for each other’s music, and compare life on the road today with how it was earlier in their careers and more.