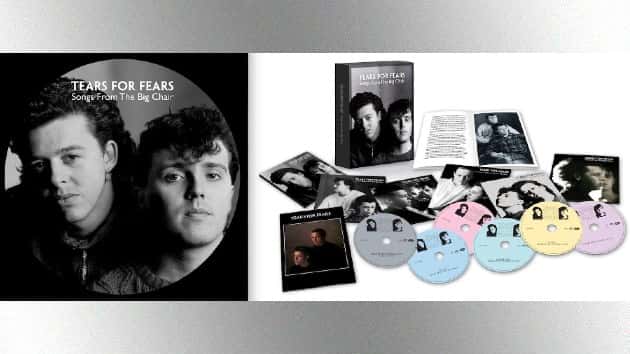 UMe/VIRGINIt’s time to rule the world once again: Tears for Fears are celebrating the 35th anniversary of their monster 1985 album, Songs from the Big Chair, with some things that you can’t do without.

On March 13, a limited-edition picture disc version of the album will be available, while a four-CD/two-DVD super deluxe box set that was previously released but is now out of print will be reissued.

Songs from the Big Chair, Tears for Fears’ second album, spun off the hits “Everybody Wants to Rule the World“and “Shout,” as well as the favorites “Head over Heels” and “Mothers Talk.” It spent five weeks at #1, stayed on the album chart for 18 months and has since gone on to sell 10 million copies.

The album’s title was inspired by 1976 TV movie Sybil, which starred Sally Field as a woman with multiple personality disorder who only feels safe when she’s sitting in her analyst’s “big chair.”

In a statement, Tears for Fears member Roland Orzabal says of Songs from the Big Chair, “We were young, we were both good-looking and we had the right music. As we move further and further from that decade and you keep hearing ‘Everybody Wants to Rule the World,’ in various forms I do think it is an era-defining album.”

Band mate Curt Smith adds, “I think the album had a lot more depth than a lot of those other albums of that time. And albums of more depth tend to stick around longer.”

Both releases are now available for pre-order.