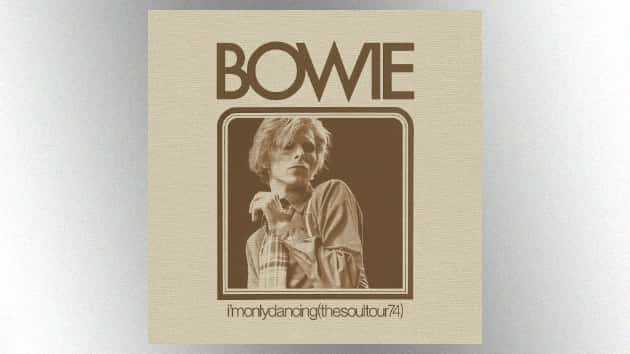 Parlophone RecordsLast month, it was announced that an album of rare 1996 David Bowie recordings titled ChangesNowBowie will be released as part of the 2020 Record Store Day campaign on April 18, and now comes word that a second limited-edition archival collection also will be issued that day.

I’m Only Dancing (The Soul Tour ’74), which will be available as a two-LP set and a two-CD package, features recently unearthed performances from a pair of Bowie concerts from the fall of 1974. Most of the album is made up of songs from an October 20 concert at the Michigan Palace in Detroit, while the final three tracks come from a November 20 show at the Municipal Auditorium in Nashville.

Among the songs featured on I’m Only Dancing are “Rebel Rebel,” “Changes,” “Moonage Daydream,” “Young Americans, “Suffragette City,” a cover of Eddie Floyd‘s “Knock on Wood” and a medley combining “Diamond Dogs” and The Rolling Stones‘ “It’s Only Rock ‘n’ Roll (But I Like It).”

As previously reported, the ChangesNowBowie album is a nine-song collection of previously unreleased tracks Bowie recorded in November ’96 prior to rehearsals for his 50th birthday concert, which was held at Madison Square Garden in January 1997. It will be released as a limited-edition CD and vinyl LP on April 18.

And here’s the track list of the two-CD version of I’m Only Dancing (The Soul Tour ’74):