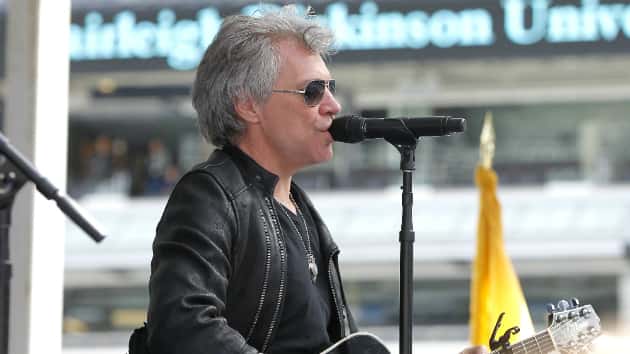 ABC/Lou RoccoNext week, Jon Bon Jovi will be heading to London, where he’ll meet up with Prince Harry, the Duke of Sussex, at the famous Abbey Road Studios and will record a charity single for the U.K. royal’s Invictus Games Foundation.

The Rock & Roll Hall of Famer will be recording a new version of his band’s recent song “Unbroken” on Saturday, February 28, at Abbey Road’s Studio 2, where The Beatles recorded most of their albums. The singer will be joined members of the Invictus Games Choir, a choral group that’s made up of wounded, injured and sick veterans and personnel from various branches of the U.K. Armed Forces.

The Bon Jovi frontman wrote “Unbroken” to draw attention to and honor veterans living with Post Traumatic Stress Disorder. The original version of the song will appear on the band’s upcoming album, Bon Jovi 2020, and also was featured in the recent documentary To Be of Service, a film that focuses on veterans with PTSD and the service dogs that help them.

The charity version of the single will be released in March. To promote the recording, Prince Harry has posted a video on his Instagram account simulating a humorous text conversation between him and Jon.

The Invictus Games Foundation oversees the organization of the Invictus Games, an international sports competition founded by Prince Harry in 2014 that features the participation of wounded, injured or sick veterans and armed-services personnel.

The Duke of Sussex will be on hand to watch the “Unbroken” recording session, and he and Bon Jovi also will meet with Invictus Games Choir members, as well as with competitors from previous Invictus Games who have been invited to attend the event.

The next Invictus Games will take place in The Hague, Netherlands, in May.