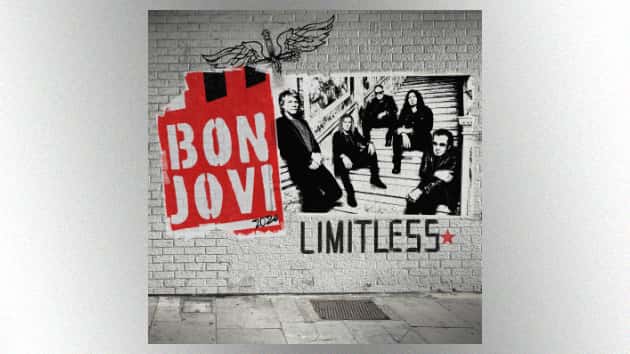 Island RecordsBon Jovi debuted its brand-new single “Limitless” yesterday, and now an official video for the tune has premiered online at BonJovi.com and YouTube.

The clip starts with a camera zooming in from outer space on midtown Manhattan, where we eventually see singer Jon Bon Jovi projected onto giant screens in Times Square as he sings the tune. Jon and the rest of the band are then shown playing “Limitless” in a building in front of windows overlooking New York City.

The video then switches to a surreal scene in an office where a group of workers all dressed in the same drab, gray uniform are busy stamping papers in unison as a sinister overseer keeps an eye on them. Suddenly, two of the workers, a man and a woman, get up and bolt out of the building together, stopping to take off their uniforms as they run off through the streets of the city, pursued by their angry boss.

The rest of the clip features footage of Bon Jovi performing “Limitless” interspersed with scenes of the couple running through the city as fast as they can, while trying to escape the overseer.

As previously reported, “Limitless” will appear on Bon Jovi’s upcoming studio album, Bon Jovi 2020, which will be released on May 15. The track is available now as a digital download and via streaming services.

You can pre-order CD, vinyl and digital versions of Bon Jovi 2020 now at BonJoviShop.com. Special bundles packaging a black or white Bon Jovi 2020 t-shirt with a copy of the album also are available.