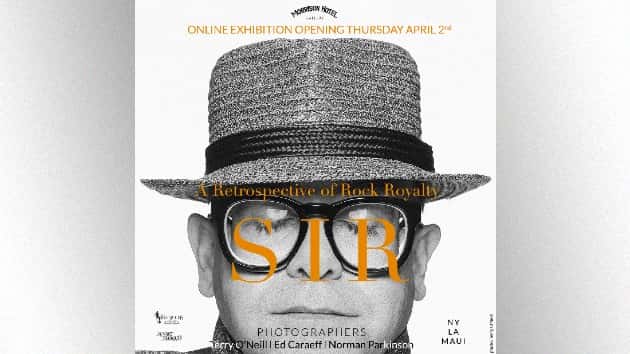 Terry O’NeillWhile Elton John‘s Farewell Yellow Brick Road tour has been sidelined by the COVID-19 pandemic, there’s another way you can “see” him: as the star of a virtual photo exhibition.

Debuting April 2 on the Morrison Hotel Gallery website, the exhibit, called SIR: A Retrospective of Rock Royalty, will run for a month online. It features numerous rare and iconic images of Elton from the likes of Terry O’Neill, who shot Elton’s show at Dodger Stadium, as well as Ed Caraeff and Norman Parkinson, both of whom have taken well-known photos of the star.

According to a statement from the gallery, “Despite a portion of John’s farewell tour being postponed, this digital exhibition will offer fans around the world the opportunity to dive headlong into the unforgettable music, glitz, and radiant superstardom of the multiple Grammy-winning artist, Rock and Roll Hall of Fame inductee, and one of the most decorated singer-songwriters of an era.”

A selection of photographic prints co-signed by Elton himself will also be available.

As previously reported, Elton’s concerts scheduled from March 26 to May 2 have been moved to 2021; the shows set to take place from May 22 through July 8 remain as scheduled.

Meanwhile, Elton’s music always seem to be around: He appears on the title track of Ozzy Osbourne‘s latest album Ordinary Man, and his classic “Your Song” is sampled on “Scared to Live,” a song on After Hours, the new album by Grammy-winning pop star The Weeknd.