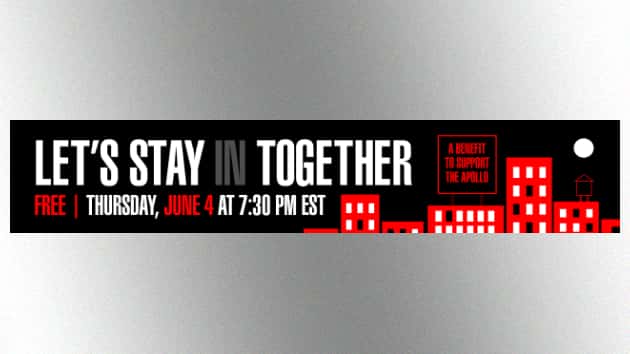 Courtesy of The Apollo Theater

Courtesy of The Apollo TheaterNew York City’s famous Apollo Theater was scheduled to host a star-studded livestream benefit on Tuesday, June 2, but the online concert has been postponed in observance of #TheShowMustBePaused music-industry protest taking place that day.

The initiative was launched in response to the recent deaths of George Floyd, Breonna Taylor, Ahmaud Arbery and other Black citizens at the hands of police.

A statement issued by the venue regarding the postponement reads, “The Apollo Theater stands with #TheShowMustBePaused…In observance of Black Out Tuesday and in solidarity with our artists, neighbors, and the global community, our benefit — Let’s Stay (IN) Together — has been rescheduled…This is only a pause, because the movement for racial justice doesn’t stop.”

The statement continues, “Neither do we…As a commissioner, presenter and cultural convener, the Apollo remains committed to our mission of supporting Black art and culture, creating spaces for artists to express themselves freely, and advocating for the safety, dignity and justice for Black people worldwide.”

Among the many artists slated to perform are Kool & the Gang, Michael McDonald and Dionne Warwick. During the concerts, the performers will salute the music of some of the legendary artists who graced the Apollo Theater stage over its 86-year history — including B.B. King, Patti LaBelle and Stevie Wonder — to highlight the venue’s contribution to arts and culture.

The livestream will raise funds to help the theater’s financial stability amid the COVID-19 pandemic, as well as help local merchants and businesses in the venue’s Harlem neighborhood affected by the health crisis.