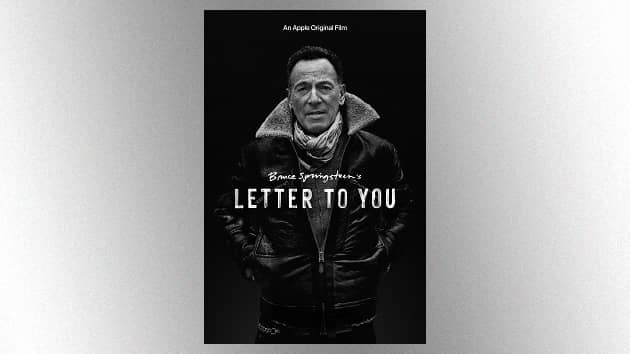 What better way for Bruce Springsteen to share his excitement about the new Apple TV+ documentary about the making of his latest studio album, Letter to You, than to write a letter about it?!

Springsteen has posted a handwritten note regarding the film, Bruce Springsteen’s Letter to You, on his official website and social media pages.

“Welcome fans and friends from all over the world,” the message begins. “Over here on E Street, we are excited about the release of our film Letter To You on Oct. 23rd. This is the first thorough documenting of the E [Street] Band at work.”

The Boss continues, “We filmed the five days of Letter to You sessions, and you will get to see the band and myself piecing together the arrangements and recordings that comprise our latest release.”

Noting that the documentary was directed by his frequent collaborator Thom Zimny and features cinematography by Joe DeSalvo, Springsteen adds that “it’s an intimate and revealing look at the 45 year partnership and work process of the E St. Band.”

The film premieres on the same day that the Letter to You album gets its release.

As previously reported, Letter to You features 12 tracks, including nine recently written compositions, and three previously unreleased songs that Bruce penned in the 1970s — “Janey Needs a Shooter,” “If I Was the Priest” and “Song for Orphans.”

You can pre-order the album now.