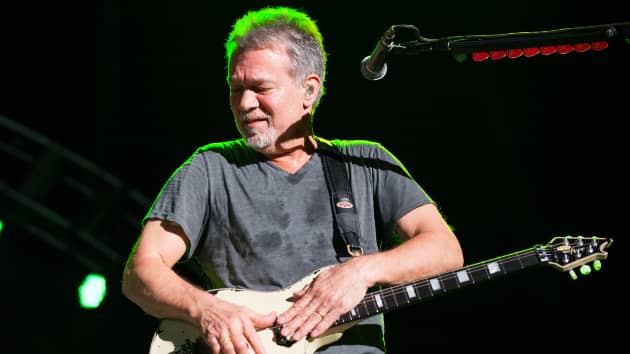 Following Eddie Van Halen‘s death Tuesday, the rock community mourned the iconic Van Halen shredder with a wave of tributes. Overnight and into Wednesday morning, even more artists shared their thoughts on the passing of the rock legend. Here are a few more of the tributes:

Led Zeppelin‘s Jimmy Page: “It is with great sadness that I heard the passing of Eddie Van Halen. He was the real deal: he pioneered a dazzling technique on guitar with taste and panache that I felt always placed him above his imitators. It was good to see him featured at the Met’s Play It Loud Exhibition. R. I. P. Eddie.”

The Who‘s Pete Townshend tells Rolling Stone: “It’s completely tragic that we have lost him. He was not just an innovative and stylish player with great taste, he was also a laidback virtuoso showman who just blew us all away every time. Every shredder today has lost their Master Teacher and Guide.”

Metallica: “We are enormously saddened to hear about the untimely passing of Eddie Van Halen. We considered him an inspiration, an idol, and after spending a summer together on the road in ’88, a friend. Sending love to Alex, @wolfvanhalen & everyone in the greater VH family.”

The Smashing Pumpkins‘ Billy Corgan: “i don’t think it’s possible to sum up what his inspiration did for me as a musician. No man made me practice harder, or push myself more on the guitar than he did. And it was simply because he made his playing so effortless that I endeavored to make mine sound the same.”

Pearl Jam‘s Mike McCready: “Eddie was like Mozart for guitar. Changed everything and he played with Soul.”