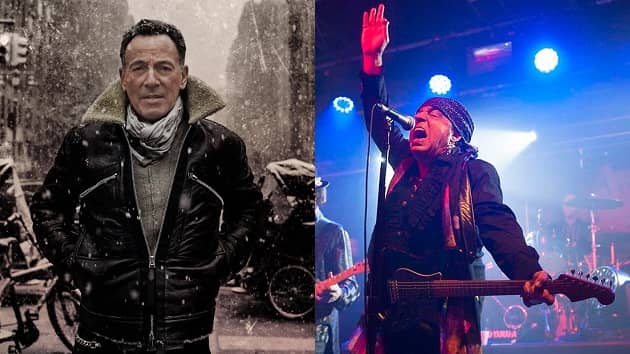 On the final episode of Bruce Springsteen’s Apple Music Hits program, Letter to You Radio  — which premiered this afternoon — the Boss chats with his E Street Band compadre Steven Van Zandt about his brand-new album, Letter to You, and its companion documentary.

As previously reported, Springsteen and the E Street Band recorded Letter to You together, live in his home studio, in just five days.

During the show, Bruce tells Little Steven, “I would say that this is the kind of record we dreamt of making when we were 15 or 16 years old, in the sense that it’s a band record, recorded by the band all at once.”

He adds, “There are very, very, very few overdubs…[A]ll of my vocals are all first take as the band played the song down for the first or second or third time.”

Springsteen wrote most of Letter to You‘s songs quickly, inspired in part by the 2018 death of George Theiss, who’d been the only other surviving member of Bruce’s teenage band The Castiles.

Springsteen explains that the material on the album “looks at the life of a musician…really, obviously because of George’s passing and some of the lyrical content, which goes all the way back to The Castiles…all the way up to where we’re at in our development right now.”

He adds that “it was very satisfying” to create “a group of songs that just [came] out of the guitar.”

Regarding the Thom Zimny-directed Letter to You documentary, streaming now on Apple TV+, Bruce notes, “It’s a document of the band both creating and performing this record, and then there is a lot of narration that goes into the philosophy of sort of what we’ve been trying to do all these years.”