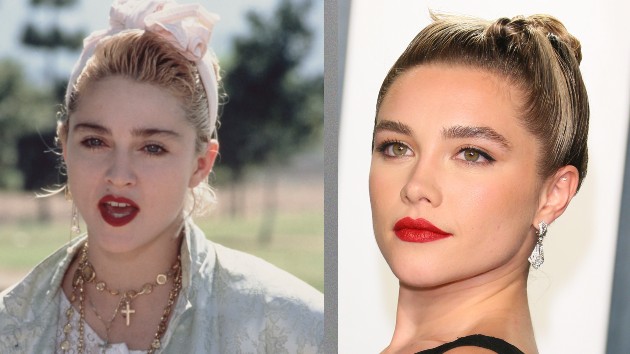 While some fans think Ozark star Julia Garner would be the perfect woman to portray Madonna in the upcoming biopic the Queen of Pop is making about her life, there may be another actress in the running for the role.

An insider tells the British tabloid The Daily Mirror that British actress Florence Pugh, best known for her roles in Midsommar and Little Women, is also being considered to play a young Madonna.

Dished the insider, “Realistically, there are only a couple of people in town who could pull this role off. The bosses who are helping put the movie together want Florence and nobody doubts that she could be amazing.”

“On the other hand, fans and the press have already weighed in and, from that perspective, Julia is their front-runner because she is such a dead ringer for early-career Madonna,” added the insider. “Still, there are serious politics and scheduling issues in the way of Julia landing the part.”

But of course, the insider notes, “The final decision will be Madonna’s alone, since she’s directing and it’s her story. She’s really only got one shot to get this right..She’s putting herself under serious pressure to find the perfect person.”

Allegedly, Florence was put on the pop icon’s radar after fans pointed out that she resembles a young Madonna.

In addition to directing the movie, Madonna is co-writing the script in collaboration with Diablo Cody, who won an Oscar for writing Juno.

Meanwhile, Florence is set to appear in the much-anticipated Marvel film Black Widow, as well as Don’t Worry Darling, the movie Harry Styles is starring in that’s being directed by his rumored new girlfriend Olivia Wilde.