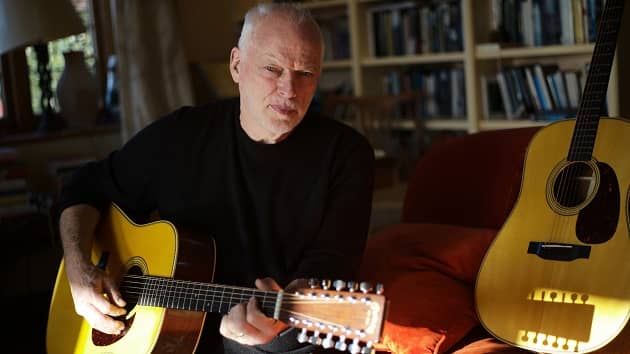 Gilmour collaborated with C. F. Martin & Co. on new six-string and 12-string versions of the D-35, based on a six-string model he purchased in New York City during the early 1970s and used regularly until he sold it via a 2019 Christie’s auction.

The six-string version’s top is made of Adirondack spruce, while the 12-string’s top is Carpathian spruce.

Martin is producing a total of 250 signature Gilmour guitars, split between the two models. The instruments will be sold at select Martin retailers, and are priced at $5,499. Proceeds from sales of the guitars will benefit the David Gilmour Charitable Foundation, which supports various charities. For more information, visit MartinGuitar.com/Gilmour.

“He is one of my all-time favorite guitar players, and having the chance to collaborate with him on an instrument was truly a bucket list moment for me,” says Martin Guitar executive Fred Greene of Gilmour, adding that the company “shares David’s hope for a more sustainable world that we can leave in good conscience for generations to come.”

In other news, Gilmour and his family members will take part in a new installment of their “Von Trapped Family” livestreamed events this Thursday at 1:30 p.m. ET at David’s Facebook page.